Android devices are discussed here, though the same concepts apply to other mobile device platforms such as iOS, Windows Phone, and more. 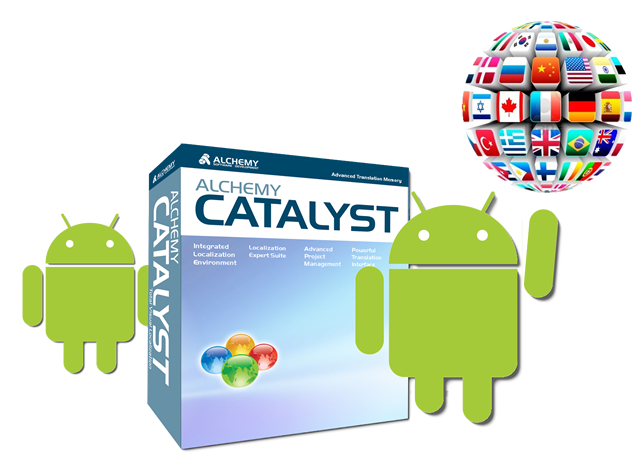 Like most software development environments, Android applications are made up of many constituent parts - some of which need to be translated during localization and others that should remain untouched. Alchemy CATALYST has dedicated parsing technology to identify which pieces should be exposed for translation and which pieces of intellectual property need to be protected and carefully stored away.

The Android application format can be multi-lingual. This means it may contain different language copies of the translatable resources. When an Android application (*.apk) is inserted into Alchemy CATALYST, ezParse technology identifies the localizable resources and displays them in the navigator. It also filters the resources and displays only those that match the current language. So, if the Catalyst target language is set to German, only the German resources will be displayed in the navigator.

This keeps the localization environment uncluttered and allows localizers to concentrate on the task at hand - translation. Changing the Catalyst target language shows a different set of resources. Note: if there are no resources matching the current language, the default set of resources is displayed and a message detailing the available languages appears in the Results Bar.

When porting other applications or technologies to Android, it is common to use object formats not native to Android itself. These could be xml or text files for example. This is where Catalyst offers extreme flexibility. Not only will Catalyst parse the built-in android formats, but it also permits the definition of rules that mean those additional file formats can also be parsed and made available for localization. If they appear in the menu or values folders, they will automatically appear for localization.

Alchemy CATALYST natively understands Android packages and so can add new languages right from within the product itself - simply right-clicking on the apk filename in navigator offers the ability to add new languages making the package multi-lingual.

In addition to strings to localize, Android Packages can also contain screen layout information in a layout file. When properly coded, the layout file will not contain text, but rather links to text that resides in the strings file. This makes the format less suitable to localization as the text is no longer located in-context with other pieces of text on that screen, but rather all strings are placed in a flat strings file. However, Catalyst comes to the rescue here, as it combines the string information and the layout detail to afford the user a visual render of the screens.

Signing is fully supported with options in the Android configuration screen to define keystore and other options.